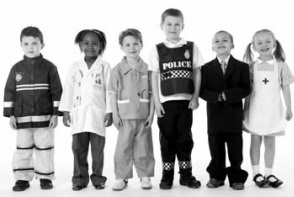 I. Objectives:
a)   recognize that people make choices because they cannot have everything they want;
a) Discuss meanings of words
b) Develop vocabulary by listening to a variety of texts read aloud
b) Relate previous experiences to what is read.
c) Use pictures to make predictions.
d) Begin to ask and answer questions about what is read.
g) Discuss characters, setting, and events.

III. Procedures:
* Linking to prior knowledge;
1. Say " I have a personal story to share with you. My sister Samantha just had her birthday, and she received some birthday money from my parents. I asked Samantha what she is going to spend the money on, and she said she wants a new purse and a new computer.  Pause, then ask the students, "When I say the word want, what does that mean?" Help students to determine that wants are: things people would like to have and include basic needs such as food, clothing, and shelter.
2. "So Samanatha wants  a new purse and a new computer, but she has to make a choice.  How would you describe what a choice is?" Guide students in determining that choice:
choosing between two or more things
3. Then ask, "Why do you think Samantha has to choose one and can't have both?"
--->Extension Opportunity: If most student responses connected to money, then further assess their understanding of making choices by extending the story with "Yes, she couldn't have both because she only had enough birthday money for one.  Samantha then told me she really wanted the purse because it was cute and she liked the color of it. But, she also wanted a computer because her old computer broke and she has to get a new computer for work." Pause, then ask children, " If you were Samantha what would you chose and why?" Could also measure students' understanding of other types of limited resources such as materials by saying she found out the computer she wanted was sold out.

* Engaging student interest;
4. Pass out the crayons and index cards to students, 1 per person, ask students, "I would like you to please think about two things you want right now in your life. These two wants can be objects like toys or books, or they could be activities like going to the park or going to a friend's house. After you have thought about your 2 wants, you are going to draw them on either side of your index card. For example, I really want to get a new iPod to play music, but I also want new running shoes." Model drawing both wants on either side of your index card. "Once you are done,  place it on your desk because we will use it for later, and then come sit on the rug for our read aloud."

5. Today while we read, "Those Shoes", I would like you to look for examples of wants in the story, and also for examples of choices. Let us know if you find one as we read, so we can put it in our "Wants and Choices" chart. "
6. Begin interactive read aloud, facilitating an ongoing conversation throughout with students, in which you engage students with the following high level questions....
>pg. 2: (If students don't identify it first) Do you think Jeremy has any wants? Why do you think that?
>pg. 4: When Jeremy's Grandma told him he couldn't get the shoes, can you make a
personal connection to a time you wanted something from your parents and they said no?
> pg. 6: How you think Jeremy is starting to feel, now that a lot of his classmates are getting the shoes and he is not? How do you know?
> pg.11: Why do you think Jeremy's Grandma checks the price on the bottom of the shoes?
> pg. 17: What is going on here? (If students don't identify it first) Do you think Jeremy is getting ready to make a choice, how can you tell? Then model how to fill in the first choice made on the "Wants and Choices" chart.
--->Extension Opportunity: Inform students that the want not chosen is what the person gave up when making their choice, also called the opportunity cost.
> pg.  19: Do you think Jeremy made the right choice? Thumbs up or thumbs down.
> pg.  21: What do you predict Jeremy is going to do? What made you think that?
> pg.  23: What are the wants Jeremy have now? How is he preparing to make a choice? Invite students to also be the one to fill these in on the "Wants and Choices" chart.
> pg. 26: What was the choice Jeremy made, how do you feel about it?
--->Extension Opportunity: If appropriate, ask students to compare and contrast the two examples of choices being made from the story. Did he make the same type of choice for each? How do you think Jeremy being sad after his first choice effect his second choice?
* Closure;
7.  "Now I would like you to return to your desks, and think about  how you would make a choice between your 2 wants on your index card, then circle the side that you would choose to have.  When you are finished, turn to a neighbor and describe your wants and how you made your choice." Listen in on multiple conversations, and then invite some pairs to share their thinking with the rest of the class.
8. On the SMART Board, introduce students to the "Birthday Choices" song, and see if anyone can fit their index card wants into the designated verses:
Song: "Birthday Choices"   Tune: Happy Birthday to You

Music Connection: Use this song to reinforce the concept of opportunity cost. Remind students that choices have consequences.

Challenge: Choose other birthday gifts and sing about them.

* Connections to other lessons;
9.  In the story we read today we saw how some of Jeremy's classmates didn't have to worry about the cost of the shoes, while Jeremy did have to think about the cost of the shoes when making his choice.  In a couple of days, we are going to talk about how making choices is different for someone with a lot of money compared to someone with not as much money, then based on what we have discovered, we will donate food to our local food bank."

V. Differentiation:- Verbal/Linguistic:  Reading the book "Those Shoes" encourages this type of learner, especially when attention is brought to terms, as done here with "wants" and "choices".

- Logical/Mathematical: Thinking conceptually about how "wants" and "needs" relate by using the "Wants and Choices" chart deepens understanding for these students.

- Visual/Spatial:  Communicating wants through drawn images on both the index cards and the  "Wants and Choices" chart allows visual/spatial learners to better express their thinking.

- Interpersonal:  Collaborative contexts such as the whole group ongoing conversation throughout the read aloud and the sharing between students during the closure of the lesson appeal to this learner.

- Body/Kinesthetic: Through the manipulation of the double sided index card, and selecting only one side when making a choice, students can more concretely appreciate the structure of a choice being made up of 2 wants.

- Musical Rhythmic: Utilizing the "Birthday Choices" song  supports students who learn best through music, by having them apply their knowledge in the verses.

- Naturalist:  A student with this inclination will be supported by way of the  "Wants and Choices" chart, and the encircling and classifying of the want that is chosen versus the want that is given up.

- Intrapersonal:  Having students individually think about 2 wants in their own life and then reflect on these wants and make a choice about them appeals to this type of learner.

- Ensure that students are not  handicapped by the terminology:  For ELL students and those with special needs who may have difficulty in making sense of the terms "wants" and "choice",  you could follow up with small group instruction. Using concrete items like toys, books, food, etc, engage in a role playing scenario with these students, where you place two objects in from of them, and help them understand those to be wants. Then have them select one of the objects, and help them to realize that is the choice they have made.